You probably don’t have to be a financial guru to at least be familiar with the concept of supply and demand.  What does this have to do with Fantasy Football?

The more of something there is, the less value it has because it’s easier to get.  Therefore, if there’s a large supply of a commodity, the demand for it (and in turn the asking price) will not be as high as something that is rare.  You can get more for gold (rare and in demand) than you can for a pencil (you can go to staples and buy 700 pencils for 134 bucks).  So one of the factors that is utilized in the Fantasy Football Draft Matrix© is the concept of supply and demand.  One thing I try to do– and it’s easier said than done– is to think of players at each position as if they are mere pieces of inventory.  I want all of my starters to score 150+ fantasy football points total in a season.  This simple rule will create a team that will typically score 90-100 points per week if you have access to the most accurate preseason projections in the business.

So, looking at the average number of players at each fantasy football position that has scored 150+ points over the past two seasons (inventory), I found the following: 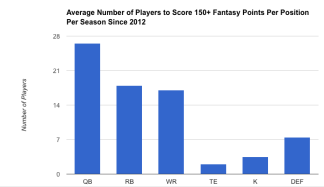 In English, the average number of players at each fantasy football position that scored 150+ points per year over the past two seasons breaks down like this:

Your reaction: “There’s only 18 guys in the league that will give me 10 points per game at running back and I have to find a way to draft two of them (or three if you flex a RB)?  There’s only 74.5 players across all positions that satisfy the 150+ point per season criteria?”

I don’t have the courage to do it, but I challenge you to produce a list of 75 players divided up by the proportions above and draft from only those players.  Clearly, you’d have to take a TE in the first or second round.  And forget about the old adage of waiting until the last round to draft a kicker. (Note: this is NOT the Fantasy Football Draft Matrix©).

That’s why it’s not enough to simply work off a cheat sheet, or website rankings.  You need to think about where you draw the line of who qualifies as a 150+ point inventory player.

Here’s something that jumps out at me.  Only two TE’s have scored 150+ points on average over the last two years.  I think it’s a tremendous idea to get an elite TE early in the draft, but that typically comes at the expense of losing out on a quality RB2, WR1, or even an elite 350+ point QB.  What to do, what to do?  Think about it, It’s your second pick… and you have to choose between Jimmy Graham, Dez Bryant, Giovani Bernard, and Drew Brees.  What if Peyton Manning is still available?

It comes down to inventory.  Which commodity is the most precious?  There’s a big drop off from Jimmy Graham and the rest of the TE’s.  And although there’s a lot of QB depth, there’s only two or three that can score 350+ points to help you compensate for the lack of a superior TE.  Sure, you could wing it and go with your gut, or go on auto draft and let Yahoo/ESPN/NFL draft for you based on their ratings..  Or you could have a system that will optimize your lineup.

The Fantasy Football Draft Matrix© makes those decisions for you.

Order Fantasy Football Playoffs Guaranteed today.  It comes with a DOUBLE your money back guarantee… if you buy the book or dvd, use the fantasy football draft matrix to draft your team, and use the projections found on this site to set your lineups every week, I guarantee you will make the playoffs, or DOUBLE your money back! – Steve Broadway, Author Fantasy Football Playoffs Guaranteed